Marc Permanyer, born in 1979 in Barcelona and based there ever since, works as a freelance since 2011. He believes this status is most suitable for him, as it invites himself to focus all the energy on the project on which he is working. Most of the time he is designing and developing websites, applications or audiovisual content, but he also works on theater, writing or crafting projects, to name a few.

A project-oriented way of life

He has a Physics degree at the UAB, after which he studied an MBA at the UB.

On the audiovisual side, he develops content to be projected live on the scene, including mapping and interactive techniques. He always develops his own programs and contents adhoc, and has worked for the Palau de la Musica Catalana, Teatre Lliure, Temporada Alta and others, usually focused on theater or concert plays.

As a developer, he started in 2005 in Pukkas Internet Solutions where he wrote tailored software and tools for companies like Danone, Eurofred or Lékue. In 2011 started working tightly with RogerP. Being a Wordpress expert, he now works as a Freelance helping companies to fullfill their online needs, from wireframing to production. 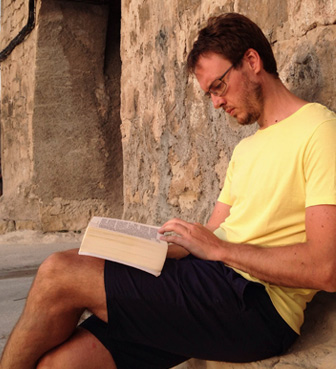